Add HealthPoint
to My Calendar 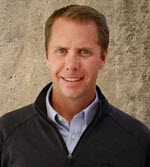 Eric Alexander, skier, climber, and mountaineer is achieving his goals while playing an instrumental role in helping other achieve their own. Eric grew up in the Colorado Rockies and started climbing in his teens. Eric has successfully climbed the highest point on six of the seven continents and led expeditions throughout Europe, North America, South America, the Himalaya and other mountainous regions on the globe.

Climbing has not always been without its trials. Eric reminds us of our humanity and demonstrates the courage it takes to succeed in climbing to the “top of the world”. Despite medical set backs Eric fought back to play an instrumental role in an historic ascent. Today, Eric continues to climb and look for new challenges both personally and in the outdoors while challenging people to overcome the “Everests” in their own lives redefining the limits of what we can achieve.

Eric Alexander, World Class Adventurer
Renowned Mountaineer, accomplished speaker, and celebrated author, Eric Alexander has been a pioneer and advocate for people with disabilities. Most notably Eric stood atop mount Everest leading his blind friend, Erik Weihenmayer to a successful summit of the world’s tallest peak, and was called Erik’s guardian angel for safely guiding his descent from the summit. This multi-record setting team has been called, by Time magazine, the greatest team in history to climb Everest, and this ascent ranked among it’s top 5 climbs ever by Outside magazine.

Climbing some of the world’s highest and most daunting peaks with people who have disabilities has set Eric’s climbing career apart and given him unique and innovative insights into the essence of leadership and teamwork. As a faithful team-mate, and as a leader of world class teams and expeditions around the globe, Eric captivates audiences worldwide through his engaging story telling, drawing his audience into these experiences, with emotion, laughter, truth and vulnerability in ways that will leave a lasting imprint on their lives.

Whether it’s business or personal, we live in a world of uncertainty where fear and doubt can get the best of us. Eric has pushed through his own fears and doubts having come back from near fatal falls, pulmonary edema, pneumonia, and tragic losses, to learn that it is not all about “my” summit, but about helping others to reach theirs. It is this principle, on which Eric speaks, that will help your team get to the top.

When engaging an audience Eric likes to share his “recipe” for success speaking of the fundamentals of team spirit (because it is more than just work), trust, courage, faith and integrity. Today, Eric continues to climb and look for new challenges both personally and in the outdoors while challenging people to overcome the “Everest’s” in their own lives redefining the limits of what we can achieve.

Decarbonization in Healthcare: Preparing today for the prospect of tomorrow
1:45pm – 2:30pm

As we are faced with the inevitable journey of decarbonization in healthcare we must be smart about what we do now…for we will have to live with it for the next 20-30 years. In this content session we’ll define lifecycles of projects, assets and systems while offering 10 steps to consider when implementing and executing upon your decarbonization strategies.