Skip to content
Featuring leading speakers from within and outside of the Industry, the Content Sessions bring you actionable and inspiring insight delivered on trends, opportunities, skills, best practices and personal growth; providing you with the means to inspire innovation, leadership and growth for you and within your own organization. Please visit frequently to see the details as they are added. 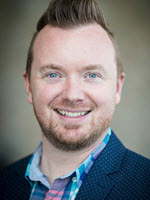 Phil Hansen, “The Artist for the People”

Artist Phil Hansen suggests that we can increase our creativity by “Embracing the Limitation.” During art school, Phil developed nerve damage in his hand which caused a constant tremor, which prevented him from working in his preferred style of art. His commitment to “embrace the shake,” as he calls it, helped him be a far more innovative artist. Phil will share his personal journey of challenge and triumph and will inspire you to rise above any obstacle to succeed. This is more than just a talk, it’s an experience!

Phil Hansen
“The Artist for the People”

Referred to by his fans as “the Artist for the People”, Phil Hansen is an internationally recognized multimedia artist, speaker, author and innovator – at the forefront of bringing art to a wider audience. Crashing irreverently through conventional boundaries, Phil works at the intersection of traditional art, electronic media, offbeat materials, and interactive experiences. He is most widely known for his metaart, videos that document the creation process (sometimes even through destruction), showing millions that art is action, not just result. Hansen’s work also extends deeply into traditional media with features on the Discovery Channel, Good Morning America, the Rachael Ray Show, Last Call with Carson Daly, Glamour, and many more. His work is sought-after by many influential clients including the Grammy Awards, Disney, Skype, Mazda, and the Rockefeller Foundation. For the tens of millions who have seen Phil’s art on TV and online, it’s hard to imagine that his artistic journey nearly came to an end when a tremor developed in his drawing hand. In exploring new ways to create art, Phil discovered that by embracing his shake, limitations could become the passageway to creativity.

His inspirational story was first shared on the TED stage to a standing ovation, and then shared around the world including on PBS, BBC, and CCTV. Now, Phil’s ability to draw parallels to the business setting has won him followers among industry and business leaders, leading to invitations to speak at the TED2013 conference, Adobe MAX Creativity Conference, World Summit of Nobel Peace Laureates, and the Million Dollar Round Table.

“Phil’s message of self-reinvention and the power of transforming adversity into opportunity is one that translates well across audiences – regardless of the industry. His message inspires, motivates, and re-energizes the creative spirit in us all.” – Ford Motor Company

“We need to first be limited in order to become limitless.” – Phil Hansen

Besides speaking and doing art, Phil is an advocate for advancing art education. He’s the author of Tattoo a Banana, a guide to exploring creativity through art with everyday materials. And he’s the founder of Goodbye-Art Academy, providing high quality and free art education videos to teachers and students everywhere.