Add StorePoint Retail
to My Calendar 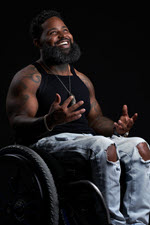 Wesley Hamilton’s journey after surviving multiple gunshots in his abdomen will inspire every human on the earth. His quintessential stories of courage, strength and perseverance resonates with participants long after he delivers the keynote. Wes instills the essential tools of positivity, self-awareness, empowerment, resilience, and acceptance in the face of any challenge. He believes “the highest human act is to inspire” – and that is exactly why he is profoundly affecting human hearts of all ages, races, lifestyles and backgrounds worldwide. Wes believes that the highest human act is to inspire – and knows that is his purpose in life.

Wesley Hamilton
GCNN has recognized Wesley Hamilton as an official CNN Hero for everything he has accomplished and contributes to our world. His dedication to inspire every single person, no matter their situation, truly is his superpower.

Wesley Hamilton was born and raised on the east side of Kansas City, Mo., where it was difficult for a young African American male to find opportunity outside of the streets. By the age of 16, he became too much for his mother to handle and moved out to be on his own. By the age of 22, he became a father to his daughter, Nevaeh.

Two years later, at only 5-foot-4 and 230-pounds, Wes was non-athletic and vastly overweight as a single father, working full time and had just won sole custody of his then 2-year-old daughter. But only 5 days after his 24th birthday, everything changed dramatically. As he was walking back to his car, Wes was shot multiple times, with one bullet slicing through his chest and fracturing a rib. The other entered his abdomen, partially severing his spine and paralyzing him below the waist. The shooter was someone he never met.

Wes spent the next three years in recovery, which also included two of those years fighting the severe emotional depression that arose from his belief that his life would forever be bedeviled by medications, surgeries and limitations.

But for the overwhelming love he had for his daughter, Wes knew he had to set an example for Nevaeh. He started down a path of taking ownership back in his life. He started a fitness and nutrition regiment, which was completely foreign to him – as he never ate healthy a day in his life, nor had any experience exercising. Wes learned everything he could about nutrition and started cooking (and now is known for his culinary skills). The fitness side of everything also took off, and in the first year led him to lose 100 pounds. He became a powerhouse of inspiration and felt his transformation had the potential to help others who are struggling similar battles, so he founded a non-profit called, Disabled But Not Really (DBNR). DBNR has helped so many individuals with disabilities (not just physical) to feel empowered and has helped so many lives overcome any mental limitations they may have – which is the driving force of the organization.. Wes has been recognized many times for his entrepreneurial success, and has been honored with a number of philanthropic awards.

Wes shares one of the most powerful stories on the premiere of the hit show on Netflix’s Season 4, Episode 2 of Queer Eye, and has been featured countless times in the media, including CNN, ABC News, BBC, CNN, CTV and TMZ.

Having Hard Conversations is Good For Business
2:00-2:30pm

Simon T. Bailey goes beyond feel good content and provides real-life deliverables that impact lives. Simon has thoughtful strategies on how to create a culture of allyship for everyone and foster an environment where everyone can flourish.

Simon T. Bailey has been recognized as a business speaker who emboldens audiences to think big and lead with purpose. Simon has more than 30 years experience in the hospitality industry, including serving as sales director for Disney Institute, and has worked with more than 1,800 organizations in 50 countries. When he is not working, Simon serves as a board member for the U.S. Dream Academy and Orlando Health Foundation Board.